Following on from the previous post. The landmark of 10 years by definition makes you reflective. It’s been a period where the “new media” of the new millennium matured and embedded itself into every part of our lives. So some reflections on changes as they apply to my area of work – content / innovation / international:

Creative economy
The last decade has in particular reinforced the position of the creative industries as a serious economic driver. The ability of the industry to grow faster than the rest of the economy out of a global recession, and adapt and thrive in the face of changing consumer behaviours, has embedded the importance of the sector in economic policy terms – a value far beyond the previously limited view as entertainment and cultural soft power.

And where the intangibility of creativity was previously seen as an industrial weakness (the challenge of art vs commerce) this growth trajectory has generated a new understanding on investability and scale, and the fundamental role of narrative, design and UX across a much wider spectrum.

Having deliberately positioned my practice at the intersection of public sector intervention and private sector development I’ve been fortunate to see this area of activity and political attention expand to match. As the importance of the creative economy has become clearer each year, industrial strategy has adapted to support a now £101.5Bn UK success story.

Globalisation
The world has to some extent got smaller, advances in digital infrastructure and a more international corporate world view have driven an increase in global investment flows and in particular a porosity of borders. Projects and supply chains transfer seamlessly between territories and economies, new services leap country through the shared values of specific demographics (not culture or language), especially for younger generations.

And yet the positive contradiction of this increase in connectivity and levelling of platforms is the simultaneous enabling of content and services which are more niche and culturally specific – distribution at scale is a solved problem.

In this light the decision of the UK to sabotage its own economic growth and global reach is an extraordinary act of self-harm.

Challenges (repeat)
Despite the positivity implied in the above the creative industries seems to continually repeat structural challenges and issues – e.g. the diversity and inclusion programme I just co-authored was effectively an update of one I was involved with a decade ago, same systemic problem.

The change this time is related to disintermediation, content is not longer “broadcast” one to many, but one to one many times. In this world a communications industry cannot afford to be monocultural, diversity is not a social nice to have but a commercial imperative for relevance and granular engagement.

So the perennial challenge of creating compelling content and stories remains, but the relationship with the consumer has changed entirely. The changes in technology platforms over the decade, and the delivery of personal agency through that, have generated a huge fragmentation of audiences. The pulse of major consolidation deals in the US, seeking to generate the scale which can fund and make the business modelling of multiple streaming services work, is an example of a creative industry trying to keep up with audience demand – because if it doesn’t they look elsewhere.

Interaction
And the above is because the most remarkable change over the decade is in consumer behaviour and audience interactions, driven by the leaps in connectivity and especially personal computing power (in our pockets).

The personalisation of services and communications has driven the emergence of significant, entirely new business sectors (social, apps, digital advertising etc). For the individual this explosion of choice and convenience has genuinely changed how we live our lives – in every aspect – what is interesting now is the emergence of the debate on positives and negatives now the novelty has worn off.

Questions on data ownership, privacy, ethics, personal responsibility, platform liability, monopoly positions, legislation in a global context etc are the valid interrogation of the shape of a still maturing industry – although potentially we should have paid attention to them a little earlier…

The most striking aspect of this change for me is the generation gap (partly responsible for the above?). Young people use personal technology and social platforms in an entirely different way, and have vastly different expectations on service and models on interactions. The focus of their attention is fast and fickle and shifting (c.f. the rise of TikTok or Snap), and to older generations impenetrable and confusing.

But there appears to be a structural positive in that, it feels to me that young people now are in general informed, committed, values driven, tolerant and international – in part because of their extraordinary access to information and opinion. They are driving conversations with a legislature which does not (cannot?) reflect their world experience.

International
Over the past decade it has been my great privilege to travel very widely for my work – to 54 individual cities across four continents, and to some of those cities many times. I’ve mentioned before my habit of taking a photo out of every hotel window – a wide array of views here: 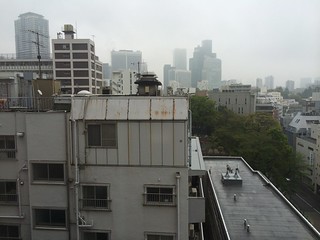 I have approached every place I’ve been in a spirit of curiosity and interest and openness, keen to understand creative and cultural expression, and in every place have had that attitude reflected back.

And whilst we are all products of place, across ten years of amazing experiences I am completely convinced that there is such a phenomenon as global citizenship.

This entry was posted in Uncategorized and tagged global markets, international, mark leaver. Bookmark the permalink.